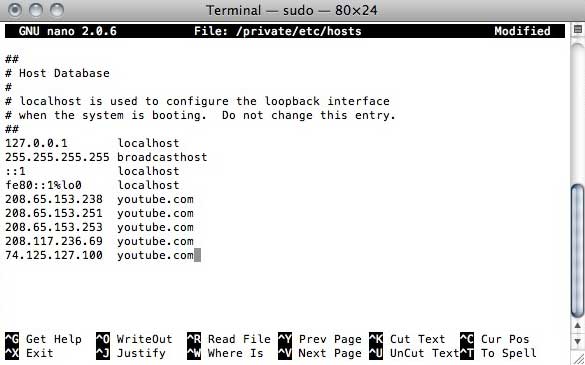 I moved back to Istanbul some months ago and we stayed at a friend’s place in the beginning where I was delighted to find out that Youtube – one of the websites which are blocked in Turkey traditionally – was available again. At first I thought it might have to do something with Istanbul being one of Europe’s capitals of culture this year. Which is of course bullcrap.

When we moved to our own flat the trouble with the local ISP TTNET began: first there was some strange problem that I was able to chat and download via BitTorrent but not to surf the net sometimes. After some research I found out that it might be a DNS-problem. I replaced the DNS-entry in OSX’s Network System Preferences with some German DNS-Servers: 85.214.73.63 (Foebud) 213.73.91.35 (CCC) 87.118.100.175 (German Privacy Foundation). They are all German Hacker/Data-Privacy/Civil-Rights-organizations so there should be no blocking whatsoever.

However Youtube – and after some time also Google-Maps (or to be more specific: the map-data of Google-Maps) – was not available anymore. I didn’t get a »Haha, we censored this«-message from the Turkish government, if you typed in youtube.com the page just loaded and loaded until it the browser gave up.

Now I read around  a little and found out that the ISP can even filter IP-addresses when you have another DNS-server (or something like that +____+).

However you can add the addresses and their URL’s in the local host-file which is accessed even before the DNS and for me that worked. There is a Howto for OSX here, do a search for »edit host file + yourOS« to find out for other Systems. I got Youtube’s IPs from here. You can of course use any IP/Domain-lookup service to look them up. What I entered was:

For some reason Google Maps is working again, too.

EDIT: Okay, it worked for a day but not anymore. I just don’t get it. I am aware that it might not be censorship but some other problem but I have no idea what.