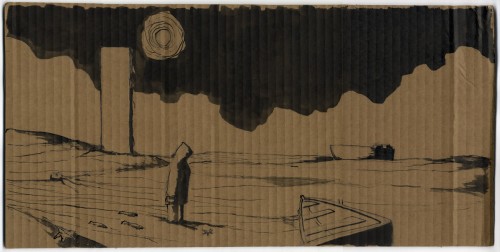 While preparing my diploma for the Endzeit-Ausstellung at PENG Mainz I found this unused illustration (drawn on packaging cardboard), heavily inspired by Lovecraft’s Dagon (that was before I knew I was such a racist) and 2001: A Space Odyssey. The latter wasn’t my intention, I was thinking about the Georgia Guidestones which are inscribed with a kind of „Howto Rebuild Civilisation after the Apocalypse“ (how awesome is that?). The Wired has a nice article on the mystery surrounding their creation.

The exhibition will take place from 5.–8. December 2012 at PENG Mainz (directions are here).